A Message From Astraea et Amora

Enter the Red Giant!  The new source of superconductivity through supermagnetism.

Your reality is growing exponentially with the arrival of the new Red Giant Star, your new Sun.  The Light of the Creation now penetrates the World of Form in a new way.  This is now the way of magnetism – quantum element to quantum element… a superconductive highway linking the infinite consciousness of creation with every single expression of form.

The Light of Source is pure consciousness; it is pure awareness.  As you expand into higher levels of consciousness you are immediately charged with the pure energy of creation that flows into your energetic fields and through your human body beyond the speed of light.

The gift of superconductivity built within the new process of supermagnetism is now aligning your innate awareness of collateral realities, both parallel and multi-expressional, which are flooding your whole being at this very moment whether you are consciously aware of it or not. 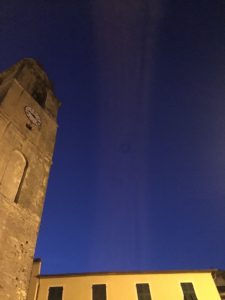 This photo was taken long after sunset with no moon in the sky.  Observe the unusual deep blue sky and the light pillar that we couldn’t see with our eyes.

This beautiful Pillar of Light that you have captured upon this photo is a testimony to the new phase of light transmission.  It is always a floodgate of light, encoded light, that when it once reaches a certain energetic load, where a level of resistance has built up into a peak point within the Body~Mind~Spirit (BMS) System, a quantum shift occurs that triggers the BMS System to “Open and Incorporate” the Light Coding.

Indeed, it is clear that all teachings that bring strength from the position of gnostic knowledge fully support the unique transfer of light codes coming from the very heart of creation.

This is a new development that accompanies the new magnetic Red Giant in your golden galaxy.  This Sun may easily be called the Great Gnostic Healer.

Gnostic ideas are carried on waves of magnetized light energy to easily transfer the highest level of wisdom suspended in a bath of truth and love, and uniquely carry a deep passion for life, for God and for the Creation of All-That-Is.

It is also a beautiful reverse process where gnostic thoughts open the human mind to receive more of the new superconductive energy.

The agnostic mind is not open initially to the power of superconductive light codes that the Creation is offering at this time.  However, as the lower mind is replaced with the Divine Mind so too are the transfer-pathways of the Divine Mind created that then open to the beautiful gnostic teachings of many of the ancient civilizations in past eras the World over, as well as opening to the sacred encoded light flooding your Gaia.

Much as the electromagnetic gateways of the previous electromagnetic based creation had electrons available to freely associate with opposite charges ~ positive to negative attractors ~ this new magnetic reality is founded in soliton particle alignment (For further information on the role of solitons in the supramolecular regulation of the human body and DNA read volume III by Georgi Stankov). Soliton particles saturate the Body~Mind~Spirit system whose orientation is toward gnostic knowledge.

Ancient wisdom teachings based on gnosis have been introduced to the reality of form before, many centuries prior to your Now.  The teachers of this great gnostic knowledge were great Beings coming from outside of this spacial creation from a place where magnetism was the foundation energy and also where gnostic teachings flourished.

This is now the time for the return of the energetic support where humanity will embrace gnostic teachings from a place of complete opening: an opening up of both the mind and the heart, to hold presence within a space of Peace and Truth that is now expanding into your world of form!

The magnetic light shall now fully expand the energy of Peace upward and outward into each life of expression within the reality presenting before you;  Peace shall become the orientation of your beingness and where gnostic teachings shall then be fully embraced! (Peace is the natural consequence of a society that embraces holistic, axiomatic world view and the introduction of the new science of the Universal Law will fulfill this function very soon. Note, Carla)