This discussion was written several months ago but the Elohim told me then that it wasn’t the right time to publish it because there were energetic events that would unfold in the course of this year that would lend understanding to these concepts. Today I came upon it again and had the knowing that it is now time to publish the discussion because the God Consciousness has now been introduced into this reality where one is now uniquely connected to the highest level of consciousness within All-That-Is.  Through this divine connection, we are then able to clearly understand the effect that thoughtforms have on our daily creations and now we are by divine grace being given the gift of the ability to immediately choose to wipe out all old thoughtforms that no longer serve us and replace them wholly and forever with those that support the highest expression of our own Soul, in order to enjoy a “Sacred Land” where only the purest of thoughts create the perfect reality in which our souls will then thrive!

With love to All, Carla

We are at a time now when we will each experience a massive inner shift and the nature of the inner shift will be based upon one’s own level of consciousness. This is not really an event where mass consciousness as we know it will decide the outcome of the event. And why is this? Because Saint Germain and the White Brotherhood, the Elohim, the Blue Crystalline Beings of Light and the energy we call “Divine Mind of God”  have shared with us a number of messages that ultimately focus on a discussion surrounding the issue of random thoughtforms that contribute to consensual reality.

We have often thought (as a random habitual thought!) that this reality can never be changed because there is some kind of power in the concept of the term “consensual reality” and that we are all here forever until the last person decides they want to ascend. This concept in and of itself has been given way too much power but in recent days it has been made clear that we are able to break the mold we call “consensual reality” and thus create for ourselves our own new field of experience, in the Now.

Following the several messages and connections that we have made over the past months, I decided to present it all together because it easily highlights an issue that is probably the most important issue of our time now, during this current phase of accelerated ascension. It has been brought to our attention that there is a net or a membrane, for lack of a better description, that surrounds the earth at the etheric level. This net is made up of thoughtforms or patterns of thoughts that have been created by each one of us in human form. For the most part, these thoughtforms are negative, disjointed chaotic thoughts and disassociated habitual patterns of thinking that are often fueled by fear-based emotions including judgment, scorn, hearsay, gossip, unqualified judgments, unkind and unreflective thoughts, debased and primitive thoughts, thoughts that occur over and over without qualification as to what they actually mean, savagely unkind and shallow in thinking. These thoughts are, for the most part, polluting the upper atmosphere, in a continuous blanket around the planet, like an inversion of smog above a large city. The power of emotion consolidates the thoughts into an immovable creation and that is why it has been so successful in its disconnection of humanity from higher guidance, and having access to the greater infinite reality beyond the net.

THE RELEASE FROM THE MATRIX

We are at a powerful moment where we can all assist in neutralizing this reality-encompassing field of thought, by sweeping it clear with the help of the light rays that are being sent to the third dimensional Earth reality in this final phase of ascension. The Divine Mind of God shared that in this powerful moment, we can sweep away humanity’s addiction to unclarified thought with an alchemical reaction that was shared with us, and which I will describe below. This alchemical neutralization will be humanity’s salvation.  By clearing out this membrane we will effectively be redirecting the mental circuitry of humanity so that those of higher vibrational levels of consciousness will literally morph out of this field of reality and into a new human experience. Indeed, every being will benefit from this re-set, as it shall open their minds to the Reflection Pause that Georgi refers to in his literary masterpiece Gnosis as a Personal Experience.  Once we are able to each embrace this Reflection Pause, we are then empowered to create anew, in every single moment.

The Divine Mind of God showed us that our strongest allies had planted roots all throughout Gaia eons ago and they are now being activated by Divine Mind to assist us with the inactivation of this net of thoughtforms.  Our allies include the Christ Consciousness, the Buddha Consciousness, the Blue Crystalline Beings, Conte St. Germain, the Mountain Consciousness, the Crystal Kingdom consciousness, and the Tree Consciousness. Let’s remember the magnetic energies of the new red giant sun and the arrival of the Great God’s Consciousness on June 17th, the codes of which are still being downloaded into our fields and bodies in this very moment.

The process of neutralizing the net was shared as a gift from Divine Mind, and referred to as the “Crown of Infinite Glory“.  It begins by visualizing a braided light of Gold-Yellow Christ consciousness/Illumination Flame wrapped with the Pink Ray of Unconditional love.  As these flames are brought into your crown chakra you will have feelings of calmness, clarity, being centred, love and compassion. Move deeply into a state of meditation in order to receive these Flames. We were told: “This is a gift of Nous on a carrier wave of Love” (For a full and exact definition of the central term “Nous” in Neoplatonism read Georgi Stankov’s gnostic book “Neoplatonism and Christianity“. Note, Carla). As these flames come into your crown chakra, hold them there briefly as you enter into a state of peace; then visualize these rays moving out into the net of thoughtforms, first into your own net and then expand the light beyond it to flood the net around the globe. We were told that this meditation activates our crystalline light body as it creates a huge halo around us and that it actually feeds our own ascension portal. As the Mind of God feeds the energy to us, we shall ultimately transcend this reality completely. 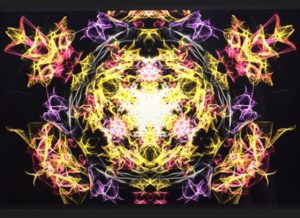 As of June and the posting of this discussion, it is now a real possibility to assist in the creation of a fifth-dimensional platform which resembles the higher realms, a Sacred Land where all negative thoughtforms no longer exist and only the purest of realities surround us!